What Sourcing Rules Turn on an Asset’s Location?

What Sourcing Rules Turn on an Asset’s Location? 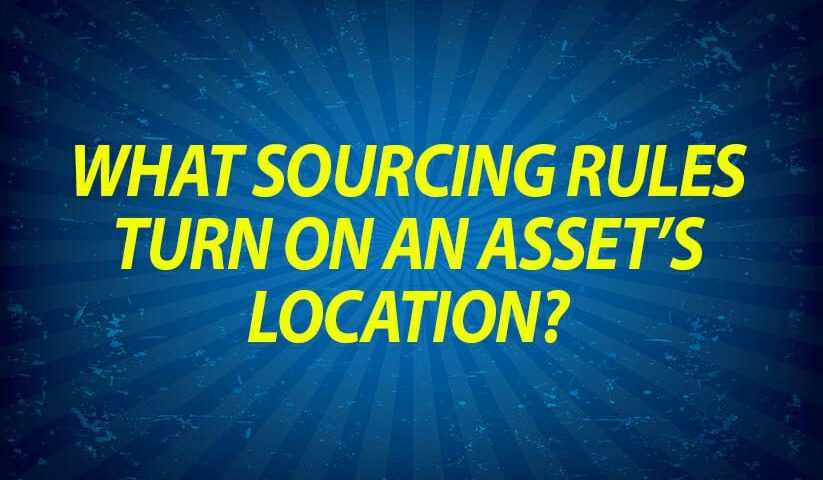 The following source rules determine source according to an asset’s location, rather than the location of the payor or the payee.

Income from gain on a sale of tangible personal property that was depreciated to any extent for U.S. tax purposes is presumptively at least partially U.S. source income to the extent of the depreciation taken. Part of the gain is allocated according to the depreciation deductions taken by the seller (or other person / entity). The source for the remaining portion of the gain is determined according to the general rules (above) governing the source of gain from the sale of personal property.

Income from rent paid for the use of tangible property is sourced the location of the property where it was used. It will have a mixed source if the property is shifted between the U.S. and Non U.S. locals at different time during the calendar of fiscal year.

(4) SOURCE RULES BASED ON LOCATION OF ACTIVITIES [MORE LATER]

The rules for sales of personal property are complex but generally, the source for income from the sale of personal property (excluding inventory but including shares of corporate stock) is determined by the seller’s residence (seller can be entity or person). However, a citizen or resident alien is a “non-resident” under IRC §865 if the income derived from selling the personal property is subject to a foreign tax amount of at least 10% of the gain. In this context, for individuals, a seller is a “resident” of the U.S. when she is either a citizen or resident alien of the U.S. without a “tax home” (IRC § 911(d)) outside the U.S., or is a nonresident alien with a tax home within the U.S. Also, a corporation, trust, or estate that is a U.S. person is a “resident” within this context (IRC §865).

For nonresident aliens of the United States, gain from the sale of virtually any personal property is sourced to the U.S. source, if the sale is deemed attributable to a U.S. office or other fixed place of business maintained in the United States.  This source rule for nonresidents overrides all other source provisions of the code and none of the exceptions listed in section 865 overrides this sourcing rule. This sourcing provision can create a tax trap for foreign persons or entities that sell goods manufactured offshore in the U.S. Sales of property via a U.S. sales office will throw off 100% U.S.-source gain, even if the property was manufactured entirely outside of the U.S.

Large foreign manufactures (i.e. auto manufacturers) seeking to sell merchandise to U.S. consumers, especially where not protected from the above sourcing rule via a treaty provision, should not open a U.S. sales office but rather mitigate the 100% U.S. sourcing problem via the use of independent brokers and distributors. Alternatively, foreign manufacturers can sell their product offshore but may have to contend with transfer pricing issues where the U.S. distribution network is a related party, which may be preferable to 100% U.S. sourcing.

What Sourcing Rules Turn on an Asset’s Location? was last modified: March 24th, 2018 by David Klasing